On Sunday, 60 Minutes opened their program with a segment on a “return” to Newtown, Connecticut four years after the school shooting which took place at Sandy Hook Elementary School.  Scott Pelley, fresh off his embarrassing segment about “fake news” and failure to expose Mike Cernovich, made sure to lead the segment off with pictures of murdered children and their family members continuing to mourn their losses, but hidden in there was one key sentence:

When we returned to Newtown, Connecticut recently, we found families who will never move on but are finding ways to move forward.

And, if you take a look at the way the text of the segment is presented on the 60 Minutes website, you can see in their headers the true way that the families were “moving forward” and in which the segment was heading right from the start – using victims to promote their failing agenda, and peddling lies and obfuscations in the process:

Notice, they lead with the victims, pointing viewers to a website solely dedicated to those murdered at Sandy Hook.  But then, they come with the lies; first, 60 Minutes stated that Sandy Hook Promise (SHP) had “trained” students and teachers on “preventing gun violence”, despite the fact that Bearing Arms has long ago exposed the group’s false claims on preventing gun violence:

However, I went to their website, and besides finding several questionable stats on gun violence, the signs they claim to teach parents, schools and community organizations to identify are nowhere to be found.

The bottom line is, this organization is ultimately calling for “sensible state and federal policies” – also known as sensible gun control, or yet another restriction on our gun rights. Conversely, those interested in protecting gun rights as well as ending gun violence lobby to fix the background check system, reform the criminal justice system, advance the efforts of NSSF’s Project ChildSafe and teach gun safety to grade school children through programs like Eddie Eagle.

Then, 60 Minutes linked to an emotion-driven video which insinuated that a troubled teen would not have been able to murder people without a gun… ignoring the many instances in which mass murderers were able to kill more victims without the use of a firearm:

The segment focused on Nicole Hockley, leader of SHP, who has been exposed in the past as more than willing to lie and distort the facts in moving towards her goal of restricting gun rights.  60 Minutes followed up on Hockley’s actions, but of course, they made sure to lie about her actions at the federal level:

That week, several of the families convinced the Connecticut legislature to pass universal background checks and to limit the size of ammunition magazines. Then, they marched on Washington to support a more modest proposal — just closing the loopholes so that all purchases require a background check.

Nicole Hockley: I stand before you now and ask you to stand with me.

Polls showed most Americans stood with them and so did the president.

It seems 60 Minutes deliberately omitted the real reason Hockley and SHP “marched” on DC in the first place – to support nearly the same exact proposal that they had just successfully persuaded the Connecticut governor to pass.

Oh, did you think SHP and gun grabbers were above waiting until tragedy struck to push another failed “Assault Weapons Ban”?  And, did you believe 60 Minutes when they stated that SHP and President Obama were only supporting a more “modest proposal” in the first place?

President Barack Obama called on the Senate to vote on a controversial ban on semiautomatic firearms modeled after military-style assault weapons, despite dim predictions from Senate leadership that such a ban will have any luck passing the upper chamber.

“These ideas shouldn’t be controversial – they’re common sense. They’re supported by a majority of the American people. And I urge the Senate and the House to give each of them a vote,” Obama said in his weekly address.

Republicans and some Democrats would get fewer than 40 votes on the assault weapons ban, Reid said, far below the threshold needed to defeat a filibuster or pass the Senate.

He added that Sen. Dianne Feinstein, D-California, the main proponent behind the ban, can propose the legislation as an amendment and therefore get a vote on the Senate floor.

And, do you remember that part where Pelley stated that “most Americans” supported their proposals?  Turns out that was just another lie as well:

But there were a couple major problems with these poll numbers: 1) People were really just being asked about whether they wanted to keep criminals from getting guns, not about a particular piece of legislation.  2) The surveys asked a vague question with no information on how the current system works.

There was a poll in April by the PEW Research Center that gets at the first issue and I think is much more accurate.  It asks people whether they are happy that the Senate gun control bill was stopped in April.  Apparently, both Republicans and Independents are generally happy that it was stopped by 51-to-34 and 48-to-41 margins.  My guess is that Republican Senators are paying a lot more attention to what Independents and Republicans wanted than Democrats who would never have voted for the Republicans anyway.  It looks to me that Republicans voted the way that their constituents wanted.  So Republicans shouldn’t really care that among all voters the poll showed support of 47 to 39 percent.  If you want to explain why Republican Senators voted against the measure, you should look at the results by political affiliation. 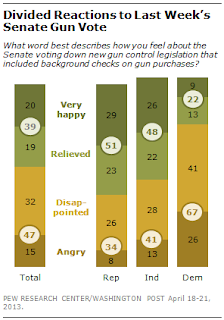 But there was one response by Hockley which really grabbed my attention; the part where she stated that SHP’s “program” about educating students on the “signs” of gun violence would have stopped a massacre by a 20-year-old who was not a student at any institution whatsoever:

Sandy Hook Promise says it has trained more than a million students and teachers but its had more reach on the Internet.

This video called “Evan” shows two students making a connection. But harder to spot in the background is what’s happening to a troubled young man.

Scott Pelley: If this program had been in place at Sandy Hook Elementary School the day before, do you think it–

Nicole Hockley: You read my mind. Sandy Hook was preventable.

You got that right – Hockley believes her focus on troubled teens at school would have prevented a mentally ill person not attending any school at all from stealing his mother’s firearm, killing her, and then proceeding to use it to kill innocent children.  Perhaps someone should inform her that a teacher or security guard carrying a concealed weapon actually could have stopped the shooter in his tracks, but then again, it seems nothing, especially not common sense, will stop her in her quest to peddle gun control.

Speaking of common sense, Hockley fails to see the lunacy of a “10 round” legal magazine limit, with no concept as to how quickly firearm magazines can be changed, for the AR-15 as well as nearly all civilian weapons:

Take note, the majority of homicide victims are shot less than 10 times… and this includes the many “justifiable homicides” committed by police, who are trained to shoot until the target is down, toting magazines which can carry as many as 16 rounds:

A Department of Justice report from 2004 about the previous Federal Assault Weapons Ban – a report which Senator Dianne Feinstein (D-Calif.), the creator of that ban, links on her official website – says that most studies say the information they can obtain shows fewer than 10 shots are used to kill most murder victims, meaning that a 10-round limit isn’t likely to have a measurable effect on murder rates. “Specific data … suggest[s] that relatively few attacks involve more than 10 shots fired.”

The report went on to say: “Gun murder victims are shot two to three times on average according to a number of sources, and a study at a Washington, DC trauma center reported that only 8% of all gunshot victims treated from 1988 through 1990 had five or more wounds,” though they note that number of gunshots may not be representative of the total number of shots fired.

However, the report also states: “the few available studies on shots fired show that assailants fire less than four shots on average, a number well within the 10-round magazine limit” adding “it is usually unclear how many cases, if any, involved more than 10 shots.”

So, when is that 30-round magazine in an AR-15 really practical?  When the “victim” is facing down three or more assailants, and that 3-4 seconds spent changing the magazine can mean the difference between life and death:

Remember when Piers Morgan (then of CNN) declared that no one needed an “assault rifle” for self-defense, and none was ever used for same? On Monday afternoon, a young man in Broken Arrow, Oklahoma grabbed his dad’s AR when a trio of ne’er-do-wells knocked on his front door. Things didn’t go well for the uninvited guests. KTUL has the story:

BROKEN ARROW, Okla. (KTUL) — One person is in custody after three suspects in a Wagoner County home invasion were shot to death Monday afternoon by one of the residents.

When the smoke had cleared, two of the masked thugs lay dead in the home’s kitchen, while the third ran outside and assumed ambient temperature on the lawn.

Limiting magazine capacity to 10 rounds is like throttling bandwidth for the entire internet to cut down on child pornography; at best, you have slightly inconvenienced the perpetrator committing a crime, and you had to make life significantly more difficult for millions of innocent people in the process, possibly causing some of them to lose their lives.

But, good luck trying to convince Hockley of that; after all, she was party to a (now dismissed) frivolous lawsuit against gun manufacturers, trying to assign blame to them for the criminal conduct of the Sandy Hook shooter.  Notably, the lawyers for the victims’ parents (including Hockley) dismissed all AR-15 owners as “notoriously incompetent”:

Their case is that the fundamental act of marketing and selling military-style weapons like the Bushmaster XM15-E2S is negligent and unreasonable, due to ample evidence the guns are used in extreme acts of violence.

“The public had demonstrated tragically that it was not capable of handling the chattel properly,” Koskoff said in court Monday, using the legal term for property. The public, as a class, is “notoriously incompetent,” he added, and said that Remington must know that. “This is not by any means a stupid company. This is a brilliant company.”

Perhaps Zach Peters, the 23-year-old Oklahoma man who successfully used the AR-15 to defend his home, would take umbrage with being dismissed as “notoriously incompetent”, but don’t expect Hockley, Pelley, or 60 Minutes to take his “feelings” into consideration as they play on emotion instead of common sense to promote gun control.

Of course, nobody is faulting Hockley or any of the other Sandy Hook families for grieving for their loss – losing a child to a psychopath murderer is something no parent should ever have to go through.  However, their “grieving” process should not involve enacting foolish legislation to restrict the rights of millions of law-abiding gun owners everywhere, while at the same time dismissing them all as “notoriously incompetent”.  Still, it is stunning, but hardly surprising, that 60 Minutes has chosen to join Hockley and use the Sandy Hook victims’ families as an emotional crutch to mislead the public into supporting their failing gun control agenda.

But would you expect any less from the “accredited” news program that time and time and time again is found to be misleading the public with lies and obfuscations to promote their agenda as “unbiased” and fact-based?