Yesterday, 60 Minutes aired a segment on “fake news,” which featured correspondent Scott Pelley interviewing several guests as per their typical style.  Regarding the guests, it was shocking to see Mike Cernovich of Danger & Play invited to be a part of the segment… and that he accepted.  He clearly knew 60 Minutes would not paint him in a fair light with their editing, but it was shocking to see 60 Minutes air a portion of the interview near the end of the segment where he said as much:

Michael Cernovich: I’m a skeptical person. And I know that there’s a lotta people gunnin’ for me. So I’m not gonna be reckless.

Scott Pelley: Who’s gunning for you?

Michael Cernovich: You are! I’m on 60 Minutes! Right?

Scott Pelley: What do you mean we’re gunning for you?

Michael Cernovich: Do I really think that you guys are gonna tell the story that I would like to have told? No. Your story’s gonna be, “Here’s a guy, spreads fake news, uses social media and these social media people better,” I know the story you guys are doing before you do it.

It was hardly the only one-sided story told in the segment.  The segment began with the story of a nutcase who tried to barge into Comet Pizza, owned by James Alefantis, in response to the “Pizzagate” story that was trending at the time.  Predictably, CBS painted the story as “fake news”:

The story of Secretary Clinton’s child sex-trafficking operation, in a pizzeria, was invented before the election by fraudulent news sites and shared by millions. James Alefantis owns the restaurant.

The introduction to the segment portrayed Alefantis as “just another guy” who happens to own a pizzeria at the heart of an internet conspiracy.  The reality about Alefantis couldn’t be further from the truth.  As I detailed in my original Pizzagate article, Alefantis is listed as the 49th most powerful person in DC, is very close with the Podesta brothers (John Podesta did run Hillary’s campaign), has visited the White House at least five times during Obama’s presidency, once posting a picture of Obama playing ping-pong with a child in the oval office.

And, perhaps most importantly, he used to run the Instagram account “jimmycomet” and not only did he post images of himself hobnobbing with the nation’s elite, there were many disturbing images connected to his Instagram account and the Comet Ping-Pong pizzeria he owns, which is known to cater to hosting parties for children. 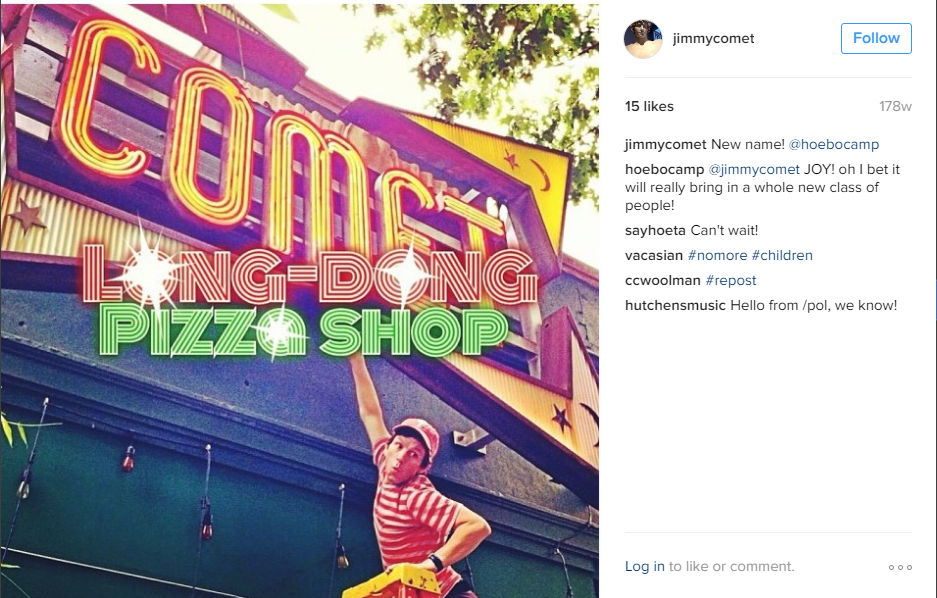 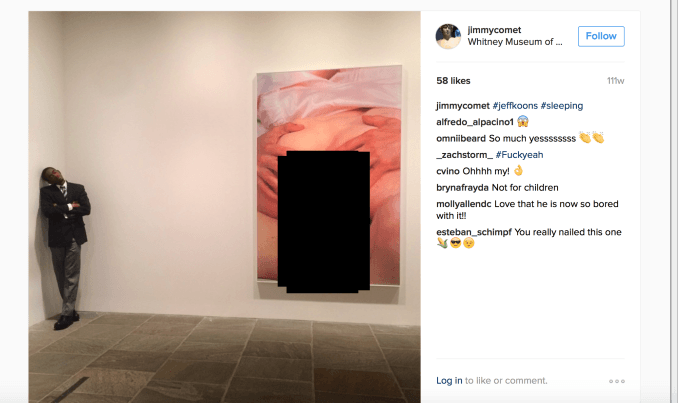 There’s a whole backstory on Alefantis and Comet Pizza here, here, and here, but it should go without saying that he is anything but the “casual pizzeria owner” he was depicted as at the start of the 60 Minutes segment.  And while I’m not condoning the actions of a random idiot shooting up Comet Pizza to “save the children”, 60 Minutes is going out of their way to represent Alefantis as “just another guy,” willfully choosing to omit details about Alefantis’ scandalous history that might cause their viewers to think otherwise about the man.

Turning to a portion of the interview with Cernovich, and to their credit, 60 Minutes (rightfully) focused on the news stories Cernovich publishes on his website, avoiding an all-out character assassination which would have brought up many other articles and Tweets in the “manosphere” that Cernovich has been responsible for.  While they earned some credibility by avoiding commentary on Cernovich’s unrelated publishing history, as well as a false rape accusation against him that has shaped his views on the topic, they quickly lost it by how they questioned his story on Hillary’s health.

Michael Cernovich: She had a seizure and froze up walking into her motorcade that day.

Scott Pelley: Well, she had pneumonia. I mean–

Michael Cernovich: How do you know? Who told you that?

Scott Pelley: Well, the campaign told us that.

Michael Cernovich: Why would you trust the campaign?

Scott Pelley: The point is you didn’t talk to anybody who’d ever examined Hillary Clinton.

Michael Cernovich: I don’t take anything Hillary Clinton is gonna say at all as true. I’m not gonna take her on her word. The media says we’re not gonna take Donald Trump on his word. And that’s why we are in these different universes.

When @Cernovich has @ScottPelley stuttering and fumbling over his words, you've won 😂💅🏼👌🏼 pic.twitter.com/brejvBzEur

So when NY Daily News writer Gersh Kuntzman (notable for an article he wrote on how firing an AR-15 was a “traumatizing” expierence which left him with “a temporary form of PTSD”) publishes an article detailing how President Trump has “classic sings of mental illness” without speaking with anyone who has examined him, that is real news and not worth mention on 60 Minutes.  But when Cernovich writes his article about Hillary’s health without speaking with anyone who examined Hillary, that is “fake news” that he needs to answer for.  Why wasn’t the NY Daily News mentioned in addition to Danger & Play as “fake news”?

And in case you didn’t believe that 60 Minutes was that dismissive of Cernovich, here’s what Scott Pelley said into the camera immediately following Cernovich’s commented highlighted above:

Cernovich’s website is just one of hundreds publishing nonsense on the right and on the left.

The segment went on to interview Jestin Coler, a liberal Democrat from Culver City, California who is allegedly the “godfather” of “fake news”, using bots to both push his stories and to make them seem more popular than they are.  He has given interviews to liberal outlets, including MSNBC, NPR, and Vanity Fair, but it took Breitbart to really unmask him for what he was – a Hillary voter who pushed actual fake news stories in an attempt to subvert the right:

Once Coler agreed to an interview, he told NPR that the purpose of starting his fake news empire in 2013 was “to highlight the extremism of the white nationalist alt-right” — or, in Coler’s exact words: “The whole idea from the start was to build a site that could infiltrate the echo chambers of the alt-right, publish blatantly false or fictional stories, and then be able to publicly denounce those stories and point out the fact that they were fiction.”

Does he strike you as the kind of guy who would promote a story on a right-wing article if it were 100% true?  But still, this is the “unbiased” source 60 Minutes chose to interview.

60 Minutes then spoke with Phil Howard, who “leads the Internet Institute at the University of Oxford which examines misinformation on social media,” and notably stated the following:

Yes, CBS and 60 Minutes are the pinnacle of “professional” journalism, which dismissed Cernovich’s claims about Hillary’s health as “nonsense”  by providing no factual evidence whatsoever to refute them beyond stating to the viewers that “the campaign told us that.”

The segment ended with the following commentary from Cernovich and Pelley and one last “zing” from 60 Minutes:

Michael Cernovich: Do I really think that you guys are gonna tell the story that I would like to have told? No. Your story’s gonna be, “Here’s a guy, spreads fake news, uses social media and these social media people better,” I know the story you guys are doing before you do it.

Michael Cernovich: Because it is an agenda. Another story is, “Here is a person who is able to bypass traditional media outlets, reach people directly, to tell a story. Maybe he’s a good guy, maybe he’s not.” I’m not going to serve as a mouthpiece for anybody.

The last line of the segment seems to be a parting shot designed to scare those who would dare to publish content on the web who are “not a part” of traditional news outlets.  Yet, the comment in and of itself, as well as Cernovich’s “story” about himself, is demonstrative of the truth regarding media today – the traditional mainstream media outlets are losing the monopoly they have held for decades, and they are fighting a losing battle to save their own hides, while dismissing anyone who dares to compete with them as “nonsense” from their ivory towers.

For the record, I like Cernovich’s alternative angle on the news, as well as a lot of the content he publishes.  But just like the mainstream media, I certainly don’t believe everything Cernovich says, nor would I take anything he publishes as gospel.  But, like him or not, he and so many others like him all across the political spectrum are popular because they are bypassing the “filter” of traditional mainstream media to reach people directly.

Gone are the days where the only national news you were able to get was at 6:30PM on one of several different networks – nowadays, the news is constant, anyone with an internet connection (including Free Market Shooter) can tell their story, and it is up to the readers to interpret the “real” and “fake” stories as they see fit.  Youtube upstarts are reaching more and more people than traditional media, with less and less legacy costs, despite attempts to subvert their right-leaning politics.  The business model in media is changing, and it is changing at a pace and in a way that has left the legacy mainstream media outlets unable to adapt and compete.

The fact that 60 Minutes feels they need to do a segment, with their as-usual ridiculous bias masquerading as “professional” journalism, is proof enough – they are scared to death that alternative media will put them out of business.  They are fighting back against the threat to their business model, but if you watched the segment, you’d realize that their efforts will be in vain.  The internet has made traditional news outlets a relic, who mostly all repeat the same story from the same source, oftentimes from a “source” who will only continue sharing content and information as long as the stories are told the way the source wants/needs them told.

It is only a matter of time until this business model explodes, and it can’t happen soon enough.