Obamacare “repeal and/or replace” has been the order of news lately; first, Republican Senators defeated President Trump’s healthcare bill, then they defeated Senator Mitch McConnell’s “repeal-in-two-years” alternative, leaving Americans stuck with Obamacare for the foreseeable future.  Needless to say, President Trump was less than pleased with this recent development:

A clearly frustrated President Trump lambasted GOP senators at The White House this morning demanding that they cancel their August recess and not leave town until acting to repeal ObamaCare.

“We can repeal, but we should repeal and replace, and we shouldn’t leave town until this is complete — until this bill is on my desk,” the president told senators at the beginning of a lunch meeting at the White House.

“Any senator who votes against debate says you are fine with Obamacare,” Trump said.

Trump didn’t build our broken healthcare system, so if Republicans are unable and/or unwilling to pass a bill, he’s right not to “own” out of control healthcare costs…

…and though the “repeal and replace” option was fraught with problems, and an outright repeal of Obamacare would have been the preferred outcome, it’s not a silver bullet that will fix what ails the US healthcare system.  Yes, Obamacare took a bad system and made it worse, but the law didn’t change the core principles defining insurer-provided healthcare, medicare, medicaid, and out-of-control doctor’s bills.

In 2008 and 2009, 5% of Americans were responsible for nearly half of the country’s medical spending.

The top 5% of spenders paid an annual average of $35,829 in doctors’ bills. By comparison, the bottom half paid an average $232 and made up about 3% of total costs.

Aside from the fact that such a tiny fraction of the country was responsible for so much of our expenses, it also found that high spenders often repeated from year to year. Those chronically ill patients skewed white and old and were twice as likely to be on public health care as the general population.

…and they are “using” healthcare because they never see the true price of it; it is “covered” via private or government insurance.  The elderly are obviously the most likely to be “users” of healthcare, but when there is no dollar value attached to their spending, why wouldn’t a doctor bill an absurd amount for their services?

It is no surprise that healthcare costs started to spiral out of control with Medicare in the 1960’s with the passage of medicare.  As The Mises Institute describes, there is no reason for healthcare

The U.S. “health care cost crisis” didn’t start until 1965. The government increased demand with the passage of Medicare and Medicaid while restricting the supply of doctors and hospitals. Health care prices responded at twice the rate of inflation (Figure 1). Now, the U.S. is repeating the same mistakes with the unveiling of Obamacare (a.k.a. “Medicare and Medicaid for the middle class”).

Since the 1980s, the government has used its buyer monopoly power, through its Medicare and Medicaid programs, to effectively set price and quality controls (e.g., underpayments) on physicians and hospitals (Stagg-Elliot 2012). For the same purpose, the Federal and state governments promoted the concentration of private insurance into buyer monopolies (e.g., HMOs). The government has also encouraged clinics and hospitals to respond by merging into concentrated provider monopolies (while continuing to limit the supply of doctors and hospitals).

That big fat bill you see before the insurance “reprices” the dollar amount is because government and insurance have created an uncecessary go-between in how healthcare is doled out.  There is no “price list” for services when you walk into the doctor’s office, because the doctor doesn’t know how much he’s going to charge you; after your “care” is meted out, the doctor (and whatever external testing service he uses) arbitrarily decides how much to “bill” insurance to ensure he gets paid properly.

If you don’t have insurance, you’re in for some serious sticker shock, like this guy who got a $153,161,25 bill for a rattlesnake bite: 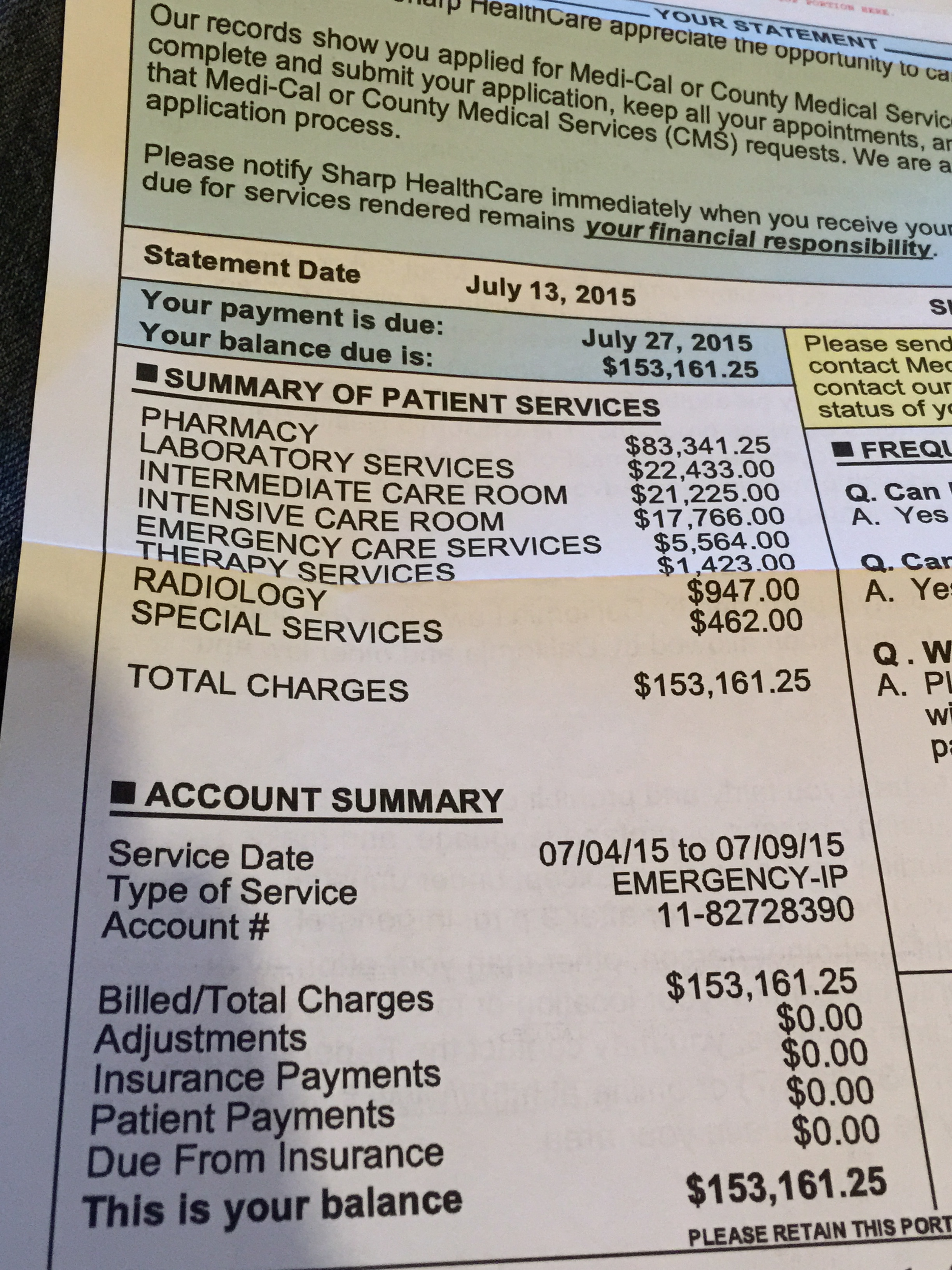 Does treating a rattlesnake bite cost hundreds of thousands of dollars?  Of course not… that’s just the “price you pay” if you aren’t in on the insurance scam:

Shockingly, the cost of actually making the anti-venom — of research and development, animal care, plasma harvesting, bottling and the like — added up to roughly one-tenth of 1 percent of the total cost. Clinical trials to evaluate the efficacy of the anti-venom accounted for another 2 percent. Other miscellaneous costs, including licensing fees, wholesaler fees, regulatory, legal and office costs, and profit to medical providers, added up to 28 percent.

Finally, over 70 percent of the cost — responsible for most of the “sticker shock” you see in so many stories about envenomation care — comes from hospital markups that are used as instruments in negotiation with insurance providers. Depending on the hospital and the insurer, some percentage of this amount later gets discounted during the final payment process.

“It’s a markup intended to be discounted back down,” Boyer explained in an interview. But if you don’t have insurance? The negotiating is all on you. And if you happen to have a high deductible for medications, you have to cough up the deductible amount, which can add up to thousands of dollars.

The case of the rattlesnake bite highlights another problem with healthcare; the litany of fees associated with care.  Of course, Obamacare not only did not solve this problem, it made it far worse:

All the regulations, taxes, and fees are built on top of an insurance system designed so that customers never see the true “bill” for the services provided.  In the case of government-insured patients, they may never see a bill at all.  What is the result of all of this?

The way it works now, the so-called “providers” (doctors, hospitals) refuse to post the cost of any service, and then charge whatever they feel they can extract, subject to an abstruse and dishonest ceremonial “negotiation” with the insurance company. The result: hospital and insurance executives get paid multi-million dollar salaries, doctors get to drive fine German cars, and the patient gets financially ass-raped, kicked to the curb, and eventually stuffed into the bankruptcy courts.

ObamaCare did nothing to fix this. It just added more victims to the rolls and upped the price of admission for a personal financial ass-raping, so that an insured individual could go to the hospital for an emergency appendectomy and end up getting dunned for thousands of dollars — or even more if one of the hosptial’s favorite cute scams is applied, such as calling in an out-of-network anesthesiologist to knock you unconscious (in which state you are unlikely to inquire whether he/she/zhe is in-network or out).

…which results in you getting billed for all those tests and services that you probably don’t need:

Not only is U.S. healthcare spending wildly inefficient, but it’s also relatively ineffective. It would be one thing to spend more money and get the same results, but according to the above data that is not true. In fact, Americans on average will have shorter lives people in other high income countries.

Life expectancy in the U.S. has nearly flatlined, and it hasn’t yet crossed the 80 year threshold. Meanwhile, Chileans, Greeks, and Israelis are all outliving their American counterparts for a fraction of the associated costs.

Repealing Obamacare is a great start, but it is just one obstacle in a long list of barriers between the consumer who needs medical care, and the doctor that delivers it.   It makes little difference whether Trump “owns” this mess or not with whatever healthcare law does or doesn’t get passed; it’s almost certainly never going to get fixed until you blow up the whole system and start from the ground up.